The Physiological Society of Italy

The Physiological Society of Italy

It is becoming increasingly clear that the ongoing pandemic will continue to impact society at large without the possibility of making reliable predictions, including the possibility for scientists to participate in many meetings such as the SIF Congress in September. Thus, we are actively investigating solutions to proceed in the most responsible way, including the eventuality of moving the 71th Congress to a later date.

We would like to reassure our delegates, exhibitors and partners that we are mindful of our duties as the organisers of the Meeting and that we will keep everyone updated about decisions taken. We thank you for your patience while we finalise our response accordingly.

We hope that you are all keeping safe in these challenging times.

The Local Organizing Committee is pleased to welcome you to the 71st National Congress of The Physiological Society of Italy, which will be held in the headquarters of the University of Milan from 17 to 19 September 2020. 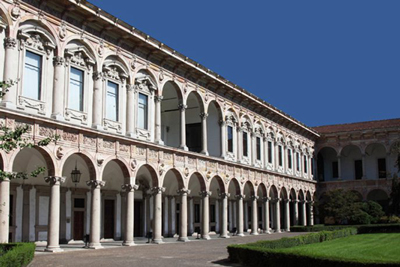 The University of Milan, known as La Statale, is a relatively young University, founded in 1924, and located in the Ca' Granda in via Festa del Perdono. This structure was realized by the will of Francesco Sforza and his wife Bianca Maria Visconti who wanted an "Hospital of the Poor" as a sign of gratitude to God for the conquest of the Duchy. Begun in 1456, its construction continued for more than 300 years, thanks to bequests and donations from citizens and to the "Festa del Perdono", a sort of jubilee with the sale of indulgences which, by special concession of the Holy See, was celebrated every two years. The project, entrusted to Antonio Averlino called "il Filarete", was completed by the architects Solari, Amadeo and Pessina. The plan proposed by Filarete was a rectangle made up of ten squares. The lateral parts, consisting of buildings with a cross plan, were intended for the patients. The entire complex was surrounded by the water of the Naviglio, that ran along the current via Francesco Sforza and expanded into what are today the Laghetto and Pantano streets.

La Statale has been always characterized by its innovative teaching proposals and by its commitment to technology transfer of scientific outcomes in the economic-productive context. A commitment that, in recent years, has materialized in the project of a scientific campus in the new Milan Innovation District (MInD), the area that hosted Expo 2015, which is about to become the site of an important scientific and technological center.

The 71st National Congress, jointly organized by physiologists from the University of Milano (UNIMI), University of Milano-Bicocca (UNIMIB) and Vita-Salute San Raffaele University (UNISR), will be aimed, as always, to encourage a multidisciplinary approach with topics spanning from molecules to the whole organism. The true value of our Discipline is indeed the ability to integrate the experimental results in the comprehension of life mechanisms; should we miss this unitary vision, we would not be Physiologists.

This year, the structure of the Congress foresees an interesting novelty: alongside with the symposia proposed by the members, in welcoming a suggestion of the SIF Board, we will introduce a cross-disciplines symposium which will address one key theme, with Speakers coming from different physiological backgrounds. Considering the awarding of the recent Nobel Prize, this year the key topic will be the role of the oxygen and oxidative stress in Physiology.

Next to science there is also the host city. Milan does not need to be introduced: it is a metropolis with much to offer. Thanks to the splendid museums (and our social dinner will be held in one of these jewels), art galleries, theaters (not to mention the Scala), the Castello Sforzesco and the inimitable Duomo, Milan offers a unique glimpse not only to lovers of history and of art, but also to fashion addicts. It is also a city that looks to the future, as witnessed by the futuristic new district of Porta Nuova, with Piazza Gae Aulenti and its new three glass skyscrapers that redesigned its skyline.

SIF Board of Directors